The famous ‘David’ is commemorated on the latest collectible coin | Lithuanian Mint
×
Free international shipping for orders over 300 EUR!
Back 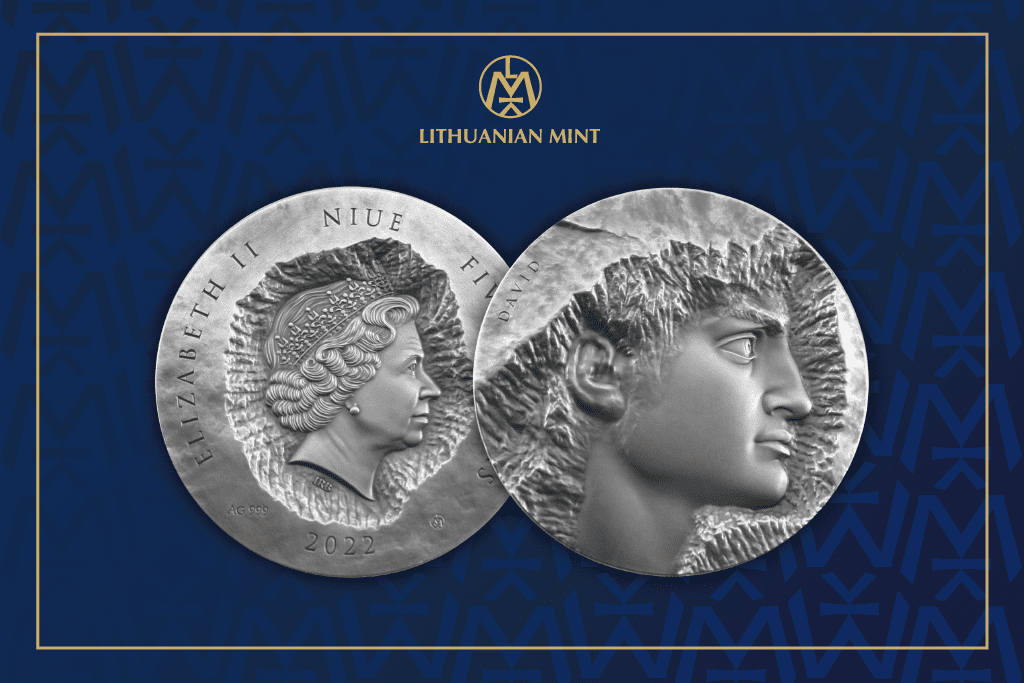 The famous ‘David’ is commemorated on the latest collectible coin

No matter whose hands it is made by, art always surprises, fascinates, and makes you stop, look & think. It has been with mankind since prehistoric times, so it can be called an integral part of our lives. To honour the most famous artists, the masters of the Lithuanian Mint have created an exclusive collectible silver coin ‘David’. It commemorates one of the oldest forms of art – sculpture.

Sculpture is the oldest branch of three-dimensional fine art, dating back to around 10,000 BCE. Although it has been here for several millennia, this branch of art strengthened and gained more popularity during the Renaissance in Italy, when scientific advances, intellect and critical thinking were enjoying their ‘golden age’. There was an obvious reason for this: sculpture, considered one of the most complex forms of art, is crucial to every stroke and movement, which can either bring a work closer to completion or ruin it completely.

It was during the Renaissance that the Italian sculptors, namely Filippo Brunelleschi, Donatello, Andrea del Verrocchio & his pupil Leonardo da Vinci, and, of course, Michelangelo, who continue to fascinate the world today, created their most famous works and perfected their extraordinary techniques. These talented masters extracted the true expression of art from a simple, cold, and rough block of stone. Their sculptures of extraordinary beauty are highly appreciated by art lovers for the precision of execution.

Works of art hiding in every stone

Some works by the Renaissance masters are so famous and well-known around the world that they act like a ‘business card’ for the artists themselves. One such example is the sculpture ‘David’ which is considered to be an iconic model of sculptural art. Historians say that the marble block waited almost four decades for its true talented master – since 1464, various artists tried unsuccessfully to subdue it until Michelangelo Buonarroti’s hands touched it for the first time in 1501. The renowned sculptor was so inspired that he hardly slept or ate, working day and night on his project, until finally ‘David’ was born out of a block of marble weighing several tonnes. The sculpture later became the symbol of Florence.

It is said that when Michelangelo decided to create ‘David’, he first made a wax model of the sculpture and kept it under water. When the water receded, the part of the wax model was uncovered, and Michelangelo replicated it by chiselling the actual sculpture in the marble. When asked how he managed to get the perfect sculptures out of stone, Michelangelo liked to say that every stone has a work of art in it – you just have to uncover it with a chisel.

A coin that honours the great masters

The silver coin ‘David’ is an exceptional piece of art commemorating the special moment when a sculpture is ‘born’. The obverse of the coin depicts the profile of David carved on the symbolic rocky surface, while the reverse features a portrait of Her Majesty Queen Elizabeth II. The high relief technology used to produce the coin expressively captures the texture of marble being chiselled. It is a work of extraordinary design and a perfect gift for someone who appreciates art or has an interest in history. The collectible coin ‘David’ is sold in a lacquered wooden box.

We invite you to order the new coin of the Lithuanian Mint ‘David’ HERE.