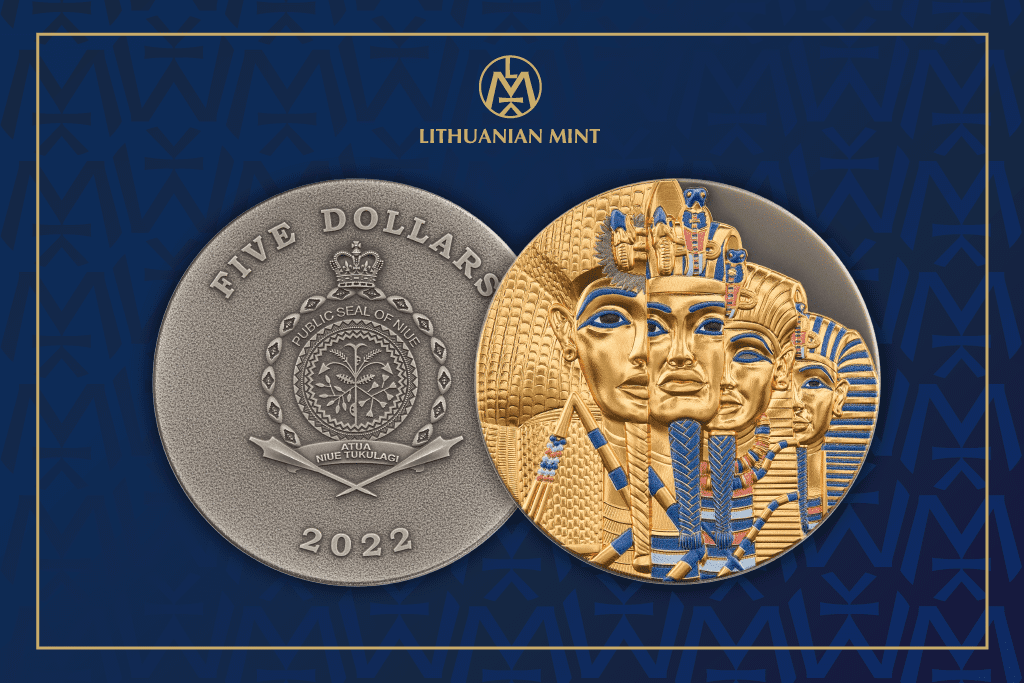 The Lithuanian Mint presents a new coin, the ‘King Tut’s Curse’, which tells the story of the most famous Egyptian tomb of and its mysterious owner. For years, it was believed that the mummy of this ruler could reveal many secrets of the lost civilization, which is why the search for his eternal resting place took so long, and eventually took an unexpected turn. This piece of art complements the spectacular ‘Missing Treasures’ series.

The tomb that may not have been found

Although, according to historical sources, Tutankhamun’s tomb may never have been found, it was coincidentally discovered in 1922 by one persistent English archaeologist, Howard Carter, whose excavations at the time were funded by the 5th Earl of Carnarvon, Lord Porchester. After six years of unsuccessful attempts, the Egyptologist nearly ended his mission until, unwilling to give up, he came close to his dream. When looking for Tutankhamun’s tomb, Carter found a step under the workmen’s huts which led to the discovery of what the Valley of the Kings had been hiding for more than 3,000 years – the tomb of the pharaoh Tutankhamun, also known as King Tut.

It is possible that the pharaoh’s tomb was unknown for a long time because the ruler died unexpectedly – although a huge royal tomb was being built for him, in the event of a royal emergency, the young pharaoh was buried in a much smaller tomb that was intended for a non-royal person. This could be counted as a major gift of fate – what H. Carter found beneath the workers’ huts had been hidden for several millennia so, unlike all the other tombs of great rulers, King Tut’s tomb was not robbed.

The treasure that surprised everyone

The world was astonished by what was found in Tutankhamun’s tomb: the sarcophagus (a box-like stone container) contained not one, but three stacked coffins containing the mummified body of the king. The two outer coffins were made of wood covered with gold and many semi-precious stones such as lazurite and turquoise. The tomb also contained around 5,000 various artefacts which have helped to piece together the history of ancient Egypt for even more scholars in the future. However, the most important treasure was the pharaoh’s golden death mask weighing more than 10 kilograms and decorated with semi-precious stones. It was a spectacular historical discovery that to this day symbolises the whole of ancient Egyptian civilization.

To tell this extraordinary story, we have created the ‘King Tut’s Curse’ coin. The reverse features a spectacular sarcophagus of the famous pharaoh with all three layers inside. The coin was produced using the best minting technologies: high relief, digital printing, aged silver, and partial gilding. This is a collectible coin of extraordinary beauty, and it will appeal to anyone with an interest in history and a desire to have a unique specimen in their collection. It is also a perfect gift for someone who appreciates original and timeless gifts. The obverse of the coin bears the public seal of Niue. The bottom of the seal shows two crossed katoua cleaving clubs, the symbol of the Niue Island, and there is the motto of Niue above them, ‘atua Niue tukulagi’.

We invite you to order the new coin of the Lithuanian Mint ‘King Tut’s Curse’ HERE.