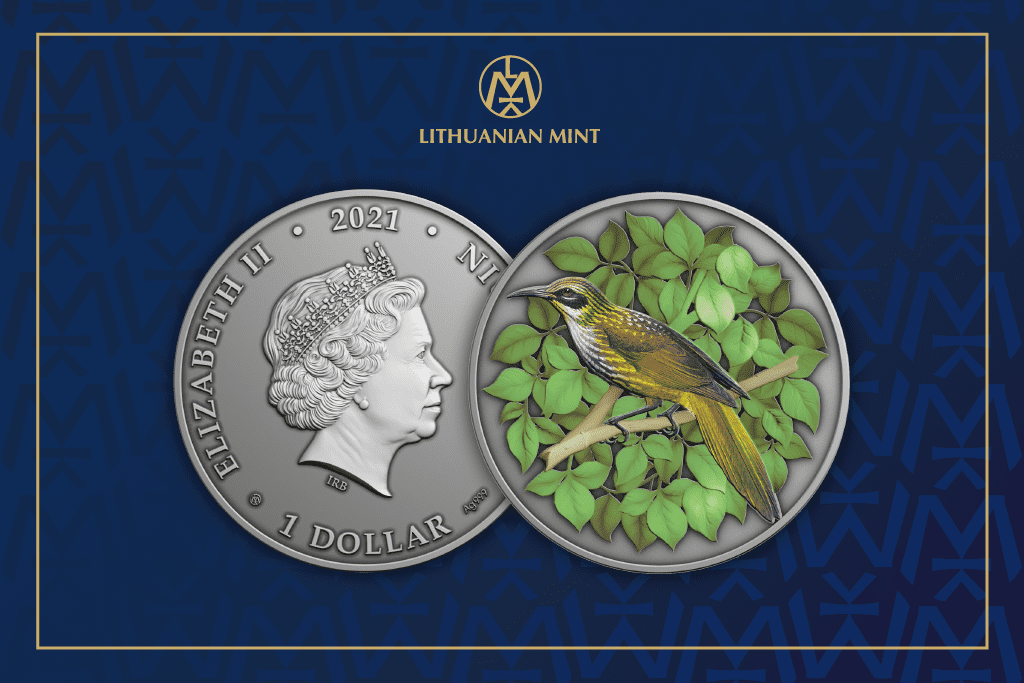 Over the years, the Earth has seen animals extinct for a variety of reasons. Sometimes climate change has been to blame, other times it has been human intervention. According to scientists, around 150 animal species extinct every day. Wouldn’t it be interesting to get to know them? Mysterious animals that ceased to exist hundreds of years ago are fascinating. The Lithuanian Mint’s new coin series “Mysteriously Extinct Animals” invites everyone to admire and get to know several of them.

With the first coin in the “Mysteriously Extinct Animals” series, the Lithuanian Mint is transporting you to the tropical islands of Hawaii, with its paradise-like scenery and exotic animals. What did Hawaii look like more than a century ago? A mysterious jungle where the colourful Kioea still flies, mystical indigenous rituals and a nature untouched by human hand.

The coin depicts the kioea (Chaetoptila angustipluma), a bird that flew in Hawaii more than 100 years ago. It is a brightly coloured bird sitting on a tree branch in a thicket of leaves. Kioea was a large bird with a long tail and a long curved beak. It was distinguished from other woodpeckers by a broad black stripe on its head. It is likely that the Hawaiians themselves were not very familiar with the bird. It is not mentioned in folklore, kioea’s feathers are not found in folk art, and there are only a few specimens of the bird’s image in museums.

Interestingly, the Hawaiian word ‘kioea’ literally means to stand tall, as if it is looking down proudly from above. The bird’s eye view is also an important feature of the coin. What story does it tell?

The design of the new Kioea collector coin is an impressive reproduction of every detail of the bird’s appearance, even the smallest. The feathers, the veins of the leaves and the curves of the beak are the result of meticulous and professional work.

The reverse of the coin depicts a bird surrounded by leaves, greenery and vegetation.

The obverse of the coin features a portrait of Her Majesty Queen Elizabeth II.

The coin is produced using high relief technology, which gives it a sculptural texture, highlights subtle details and adds sparkle. UV printing, ageing and edge technologies have also been applied. The coin is sold in a special box.