Return to your childhood: the story of a ruthless Snow Queen | Lithuanian Mint
×
Free international shipping for orders over 300 EUR!
Back 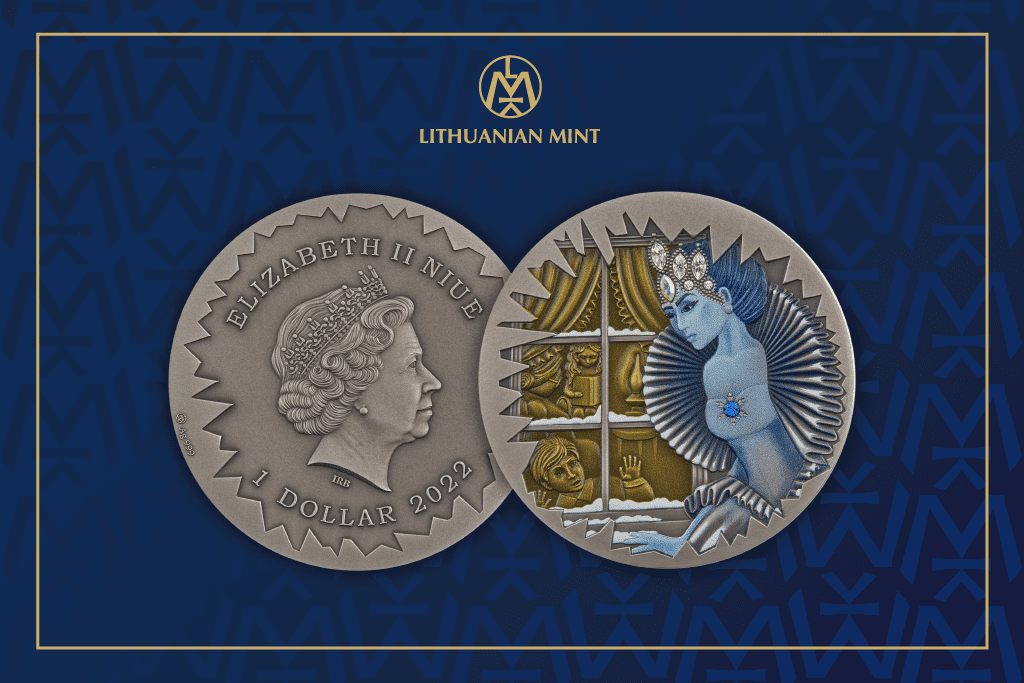 Return to your childhood: the story of a ruthless Snow Queen

One of the most nostalgic series of the Lithuanian Mint, ‘Fairy Tales’, has been supplemented by a new silver collectible coin of enchanting beauty, featuring the ruthless ruler of the Land of Ice – a story familiar from childhood. Meet ‘The Snow Queen’ who sought to turn the whole world into a kingdom of cold and darkness!

A character symbolising the bleakness of winter

In the fairy tales, legends, and myths of various peoples, especially those living in the north, one can find an evil witch who seeks to harm anyone who gets in her way. For example, the Viking sagas feature the vengeful beauty Grimhilde who schemed and killed many unfortunates, the antagonist of the Finnish national epic ‘Kalevala’ speaks of the villainous queen Louhi who reigned in the northern region of Pohjola and wanted to steal a magical mill, while the Japanese folklore mentions oshiroi babā – a ghastly old crone who descends from the snowy mountains in winter and is still feared by Japanese children to this day. In many cases, these and similar images of a wicked witch are a personification of a bleak, dark and cold winter, which eventually earned a distinct role in global folklore.

The opposite of the family idyll

The reverse of the collectible coin depicts a magical moment – a grandmother sitting in a warm, cozy room, telling her grandchildren fairy tales by the light of an oil lamp. A lonely malevolent queen, a symbol of solitude and gloom that only appears in a blizzard, watches them enviously through the darkened window. Although her head is adorned with a diadem resembling ice crystals and her bosom with a snowflake-shaped amulet, the queen’s wistful gaze betrays her doubt: is she truly so heartless that not even true goodness can melt her frozen heart?

The scene depicted in the coin is not only the motif of a well-known fairy tale, but also a symbolic allegory for human values: sincerity and empathy. When we grow up, we forget to let warmth into our hearts, we avoid showing our true feelings and use indifference as a shield. That’s why ‘The Snow Queen’ reminds each of us that the sincerity of children can melt even the coldest heart – as the Christian Gospel according to Matthew puts it: ‘Unless you change and become like little children, you will never enter the kingdom of heaven’ (Mt 18, 1–5. 10. 12–14).

The masters of the Lithuanian Mint used modern minting technologies – high relief and UV printing – to convey the image of the Snow Queen. The aged silver collectible coin is also decorated with SWAROVSKI® crystals in different colours, sizes, and shapes: ice-coloured oval and round ones were used for the Queen’s diadem, while a round crystal in indigo blue was used for the amulet.

The obverse of the coin shows a portrait of Her Majesty Queen Elizabeth II surrounded by a frame representing ice. This exquisite piece of art will make a perfect symbolic gift for those you wish to show your care or remind of your devotion.

We invite you to order the new coin of the Lithuanian Mint ‘The Snow Queen’ HERE.