A tragic love story immortalized in a silver coin | Lithuanian Mint
×
Free international shipping for orders over 300 EUR!
Back 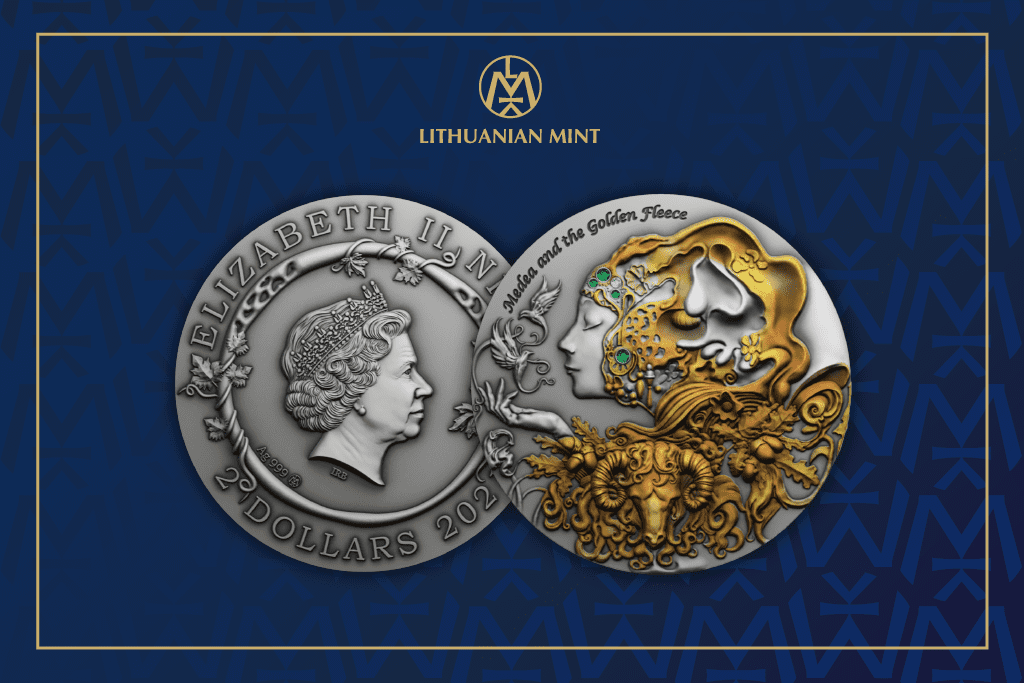 A tragic love story immortalized in a silver coin

Greek mythology is like a chest that contains a wealth of stories about ancient Greek gods, mythical creatures and various heroes. Nearly everyone has heard at least one Greek mythical story – one of the oldest is about Jason and the Argonauts. This story is commemorated in the new series ‘Myths of Love’ by Lithuanian Mint. The first silver coin from this series is called ‘Medea and the Golden Fleece’, and it is dedicated to the feelings without which Medea and Jason’s love could not exist: tenderness, courage, and devotion.

An idea that came from Ancient Greece

The Greek myth of Jason and the Golden Fleece is one of the oldest heroic myths. It is a classical story about betrayal and revenge, which has a tragic ending like many other Greek myths. Despite the painful events, this story also has another – sensitive side revealed in the coin ‘Medea and the Golden Fleece’ from the series ‘Myths of Love’.

How did this dramatic love story begin? The king of the gods, Zeus, presented Frix, Jason’s ancestor, with a winged golden ram, and Frix flew from Greece to Colchis on top of it. Aeëtes, who was the son of the Sun god Helios and the king of Colchis, sacrificed the ram and hung its fleece in a sacred grove guarded by a dragon – according to the prophecy by an oracle, if Aeëtes lost the wool, he would loose his kingdom, too. Determined to reclaim his throne, Jason agreed to take the golden fleece from Aeëtes but Medea, Aeëtes’ daughter, fell in love with Jason and, in exchange for a marriage, offered to help Jason in his quest. That is how a story full of love, devotion, and cruelty began.

One of the most striking figures of Greek mythology

The reverse of this silver coin shows Medea herself – a powerful woman, a crazy lover, and a fearsome sorceress who knows the meaning of infinite love, care, passion, and great betrayal. Medea has many faces and remains one of the most compelling female figures in Greek mythology. The coin depicts her when she was happy and radiating beauty, sexuality, and elegance at that stage of her life. This madly strong feminine energy captivated Jason but the spells were not eternal. The image of Medea in this coin by Lithuanian Mint is decorated with five SWAROVSKI crystals – four green ones symbolize flora, and the blue one is for water.

The obverse of the coin features a portrait of Her Majesty Queen Elizabeth II, surrounded by ravishing climbing plants. UV printing and high relief technologies were used to make this new coin. The packaging of the work – a wooden box – has a unique aged design.

We use cookies to ensure that we give you the best experience on our website. If you continue to use this site we will assume that you are happy with it.Ok