A surprise for sci-fi fans. Let's embark on an industrial odyssey! | Lithuanian Mint
×
Free international shipping for orders over 300 EUR!
Back 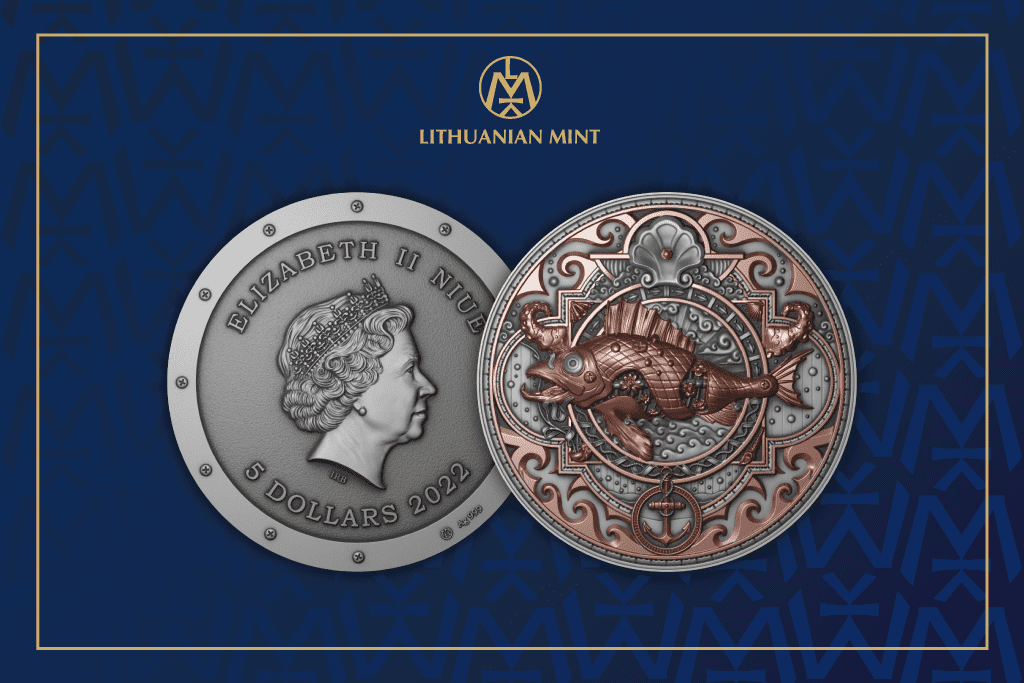 A surprise for sci-fi fans. Let’s embark on an industrial odyssey!

Nowadays, the nostalgia for old-school fashion accessories, electronics or other antiques has a name – it’s vintage. Due to the popularity of this peculiar style, unconventional jewellery or artwork made from various pieces of machinery find their way to the shops and even our homes more often. Moreover, lots of antique fans are also fond of a distinct subgenre called steampunk, where they admire almost anything that works mechanically. The Lithuanian Mint presents a new collectible silver coin, the ‘Metal Fish’ from the ‘Steampunk’ series, which will surely appeal to both vintage and science fiction fans. Let’s embark on an industrial odyssey and admire it!

Although the steampunk subculture is associated with the inventions of the late 19th century – rigid airships, steam engines and other breakthroughs in mechanical technology – nowadays it is said that the movement itself started around the 1980s. It was pioneered by the American writer Kevin Wayne Jeter and his sci-fi novel ‘Morlock Night’ (1979). There are those who argue that the emergence of steampunk as a culture can also be traced back to the 1954 film ‘20,000 Leagues Under the Sea’, which was a Walt Disney-produced and critically acclaimed adaptation of the novel of the same name by a French writer Jules Verne. One of the main stars of the movie – Captain Nemo’s submarine called ‘Nautilus’ – and the famous brass time machine from Herbert George Wells’ novel are perhaps two of the most striking symbols of steampunk in general.

The industrial revolution and sustainability – it’s a match!

Interestingly, this particular worldview that unites sci-fi fans involves not only incorporating elements from the past into the present, but also implementing the basics of sustainability: people are encouraged to not to throw things away and reuse them instead, sometimes in very original and creative ways – that applies for clothing, home decor, etc. Many people who are interested in steampunk have made their clothes or interior accessories out of decor elements seemingly unrelated to the industrial revolution, thus creating a style that is truly unique and carries its own charm.

In the latest piece by the Lithuanian Mint, the masters have portrayed a shimmering, robotic-looking ‘Metal Fish’ that resembles a 19th-century automaton. The creature is surrounded by scattered parts of a ship and other details. The metal body creates an impression of coldness and strangeness associated with senseless technology. It is juxtaposed to the decorative elements – one can see gentle symbols of the underwater world around the fish, such as flowers, seashells, and tentacles of an octopus. They represent the beauty and tenderness of nature and life in general. Thus, seemingly opposite things are combined in the overall picture.

The coin is made of aged silver and has a high relief. What is more, a new minting technology – segmented copper plating – was developed and implemented specifically for the coins of the ‘Steampunk’ series. The obverse features a portrait of Her Majesty Queen Elizabeth II. The coin is sold in a wooden box with a certificate of authenticity.

We invite you to order the new coin of the Lithuanian Mint the ‘Metal Fish’ HERE.