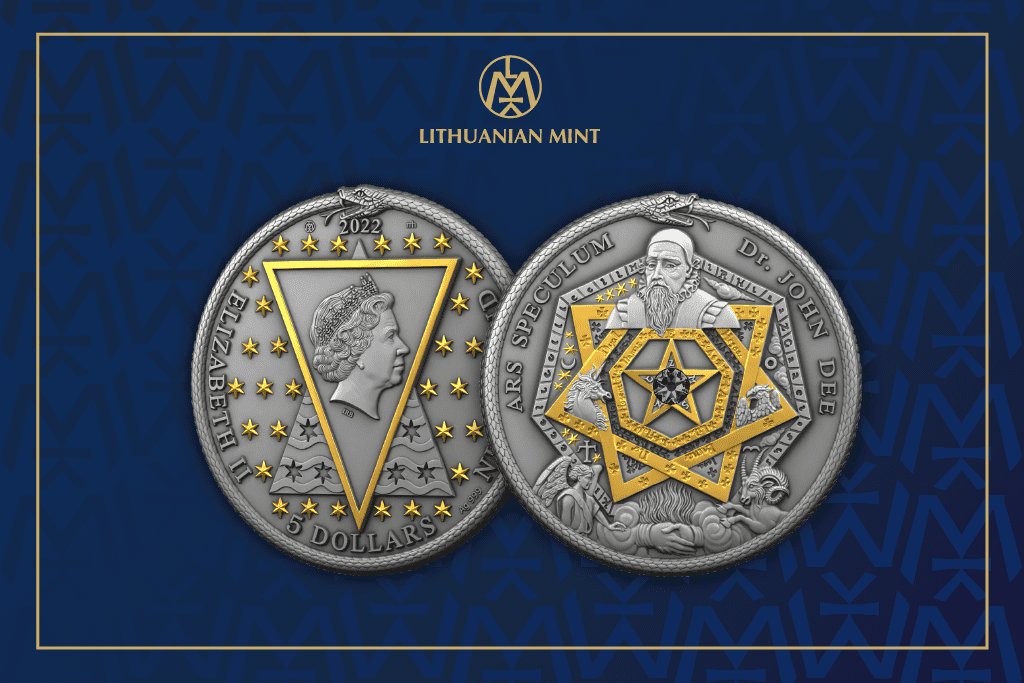 We present the second coin in ‘The Alchemists’ series – a collectible silver coin called ‘Dr. J. Dee – Ars Speculum’. The coin continues the series dedicated to remembering and honouring the famous and historically significant alchemists who sought ways to turn base metals into gold. The new coin is dedicated to a famous 16th century alchemist, astronomer, mathematician, and advisor to Queen Elizabeth I – Dr. John Dee.

An alchemist who communicated with angels

One of the best-known alchemists throughout our history, Dr. John Dee distinguished himself not only for trying to turn base metals into gold, like all other alchemists, but also for seeking to unravel the secrets of the Universe. As John Dee himself declared, he sought for the utopian unity of nations, so his goal was to understand the most important truths of the world and human life. Many reports regarding Dr. John Dee’s life state that he was able to communicate with angels and that he even applied various occult practices.

The speculum (also known as ars speculum) is one of the best known items used by John Dee that is now displayed in the British Museum. This little black Aztec cult object made from obsidian was brought to Europe in the late 1520s. Ars speculum resembles a hand mirror and John Dee used it as a tool to contact the angels. That is why our experts adorned the coin dedicated to this alchemist with a black Swarovski crystal – it symbolizes the famous speculum and the alchemist’s goal of unravelling the secrets of the Universe.

A loyal advisor and a diverse personality

Throughout history, Dr. John Dee has also been known as an advisor to Queen Elizabeth I. He was even her personal astrologer for a while, advising on decisions to be taken and how best to act. However, the personal life of alchemist John Dee still intrigues a lot of people. Stage plays are still produced, films are made, books are written about him, and exceptional details in the history of his life are still sought. Various research shows that this alchemist had a very diverse personality and was interested in many areas… It seems that in one short human life he wanted to know all the secrets of the world, and persistently tried to complete his goals.

This famous alchemist and mathematician devoted a great deal of time to getting to know the world: he amassed the largest library in England, and he constantly carried out various scientific experiments and research with his students at home. The quest to turn base metals into gold was one of the main goals of his research.

A coin full of cryptic symbols

The coin created to remember such a prominent person was minted in high relief, using aged silver with an antique surface finish. The pride of our masters, the original edge of the coin, is a stylized snake Uroboros, symbolizing the eternal cycle of life and death.

The reverse side depicts the alchemist surrounded by various mysteries of the world and semi-real, semi-mythical creatures – they all symbolize the alchemist’s desire for knowledge and his thoughts constantly revolving around it. The coin also portrays the balance of the powers of good (angels) and evil (demons).

The obverse of the coin features a portrait of Her Majesty Queen Elizabeth II in the centre of the design, surrounded by magical symbols: water and stars that stand for the air element.

We invite you to order the new coin of the Lithuanian Mint ‘Dr. John Dee – Ars Speculum’ HERE.